Emacs and C++ and CUDA

Recently, I got an Nvidia GeForce (RTX series) card. I’ve been using it to learn about graphics programming and raytracing and things like that under Linux. And I am using Emacs to edit the C++ files that all the graphics SDKs seem to use.

There is a C/C++-based programming framework called CUDA (stands for “Compute Unified Device Architecture”) that Nvidia created some time ago for GPGPU programming. In some cases it has been exapnded from that role, and OptiX shader code can be written in it. OptiX is another Nvidia SDK, this one for raytracing applications.

What has became convenient lately is that Ubuntu (my distro of choice for desktop Linux) has made a package available to install the CUDA SDK. So on Ubuntu 19.10, and the soon-to-be released Ubuntu 20.04, you can get a usable CUDA SDK install “out of the box”.

NOTE: Other related SDKs may require you to be a registered developer with Nvidia in order to download and install them.

The CUDA toolkit comes with nvcc - The NVIDIA CUDA Compiler and it even allows builds on a host that doesn’t have an Nvidia graphics card installed. Of course, something linked against the CUDA runtime on a system that doesn’t have the underlying Nvidia hardware/driver won’t run. 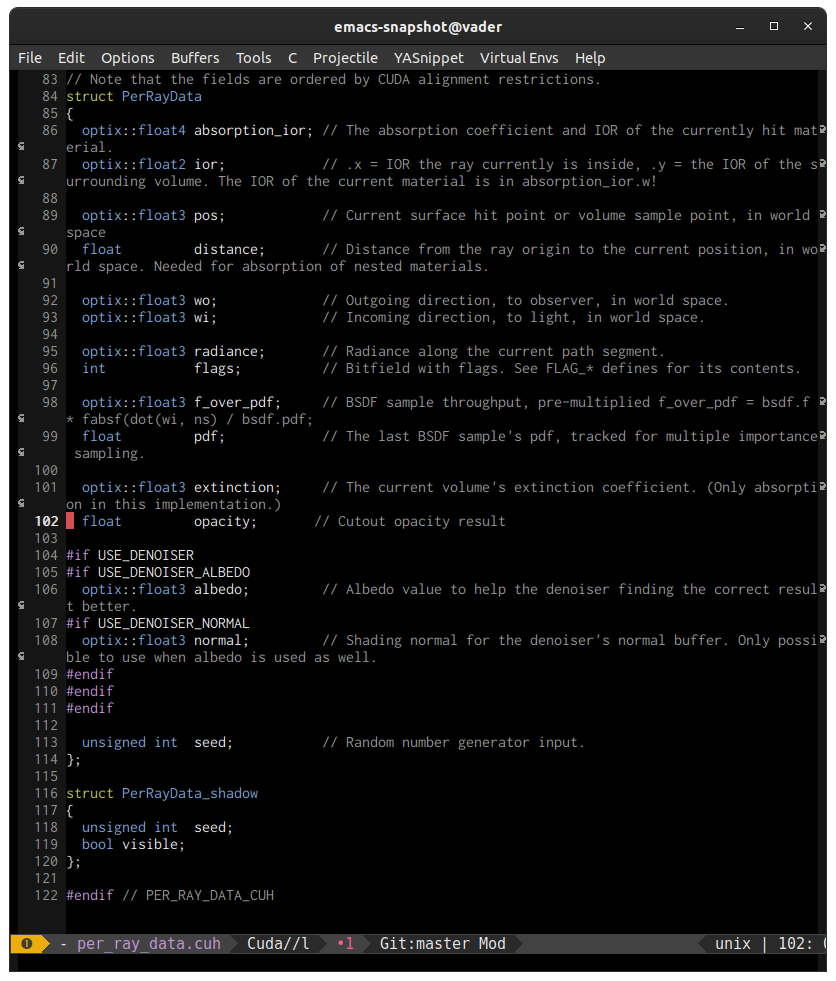 There are some established naming conventions for CUDA format files using file extensions.

Flycheck is “On the fly syntax checking for GNU Emacs”, and it includes built-in support for CUDA files. Since nvcc is the compiler, flycheck uses it to check cuda-mode files. nvcc uses file extensions to determine type of file and type of processing to do on it, but does not specifically recognize “.cuh” extensions. So even if Emacs knew if was a CUDA-mode file, flycheck would not work, because nvcc would not work.

I was able to send a PR to flycheck project to fix this, [cuda-nvcc: Does not work with .h or .cuh files]. Now any CUDA source header files will also work with flycheck.

I was able to use irony-mode and its kin for the C++-side handling in emacs.

On ubuntu, this means installing some pre-reqs to be able to build the irony-server.

If those pre-reqs are met, then within Emacs with the irony package installed, the emacs package itself can down, build, and install the irony server for its use. M-x irony-install-server

See elisp/lang-cpp.el in my shared .emacs.d repo for additional details.

CMake is a tool to facilitate more robust cross-platform C++ builds and is popular for the C++ projects that seem to dominate in the computer graphics world.

There is a way to have CMake generate a file that other tools can use to determine proper compile commands and include directories and the like.

So, some other related emacs packages and config for cmake. the irony-cdb-autosetup-compile-options is how to tell irony to automatically look for the compile_commands.json files

See my .emacs.d for more

I have finally made it possible to share my .emacs.d, available in a GitHub repo idcrook/.emacs.d

The C++ file .emacs.d init file is found at lang-cpp.el

It is also included as part of my dotfiles repo, i-dotfiles (as a git submodule)