Using different Linux systems with a dual-monitor setup has been out frustrating, especially with the physical LCD monitors using different pixel resolutions. Now I have some (non-foolproof) ways from command line under Linux to set their resolutions.

A note about my setup

I prefer running both external monitors at 1440p resolution. Since both monitors are approximately the same physical dimensions, moving applications across monitors set to the same resolution works seamlessly. There are no “gaps” or “walls” when moving the mouse pointer between monitors. No different screen size for fonts. It just makes mork sense to work this way.

For a while, I have been running these connected to a 2015 13-inch MacBook Pro. macOS has excellent multi-display support. macOS recognizes and remembers multiple-display settings and will switch to most recent configuration with clamshell open (built-in LCD + two external displays) or closed (two external displays). It knows about and presents the full complement of native and scaling resolutions for each monitor in System Preferences -> Displays applet.

I recently purchased an Nvidia graphics card and started learning about computer graphics programming. I installed the card in a desktop computer that boots Linux or Windows. The system is what I used to develop the raytracing, CUDA, OptiX and Vulkan repos on my GitHub. And I prefer to do this type of development in Linux.

And it so happens that Vulkan development is even (mostly) supported on an Intel integrated graphics CPU that is seven years old at this point, and I am using that system to write this post.

The scripts are for running on recent Ubuntu Linux (19.10 or 20.04). Windows 10 drivers seem to encounter similar issues, but will not be covered below.

After iterating with this for way too long, I finally was able to reliably set both monitors to desired configuration from command line. Originally I could only get the nvidia-settings under Linux (which comes with the nvidia driver) to change the resolution.

Ultimately, the incantation was determined by checking the Xorg.log file to see what appeared when the nvidia-settings applet changed the resolutions, and trying various partially documented strings in nvidia driver manpages.

The integrated graphics system presented another problem. The Gnome desktop Settings -> Displays applet does not present the 1440p option (2560x1440) as a choice for the 4K monitor.

Fortunately, the Intel driver seems to play nice with xrandr, a utility that is designed to deal with multiple monitors and resolutions and the like. And new modes added with it even show up in the Displays applet. It’s not necessary to use Displays control panel once the command line script has been run, but it is interesting to me to note that. 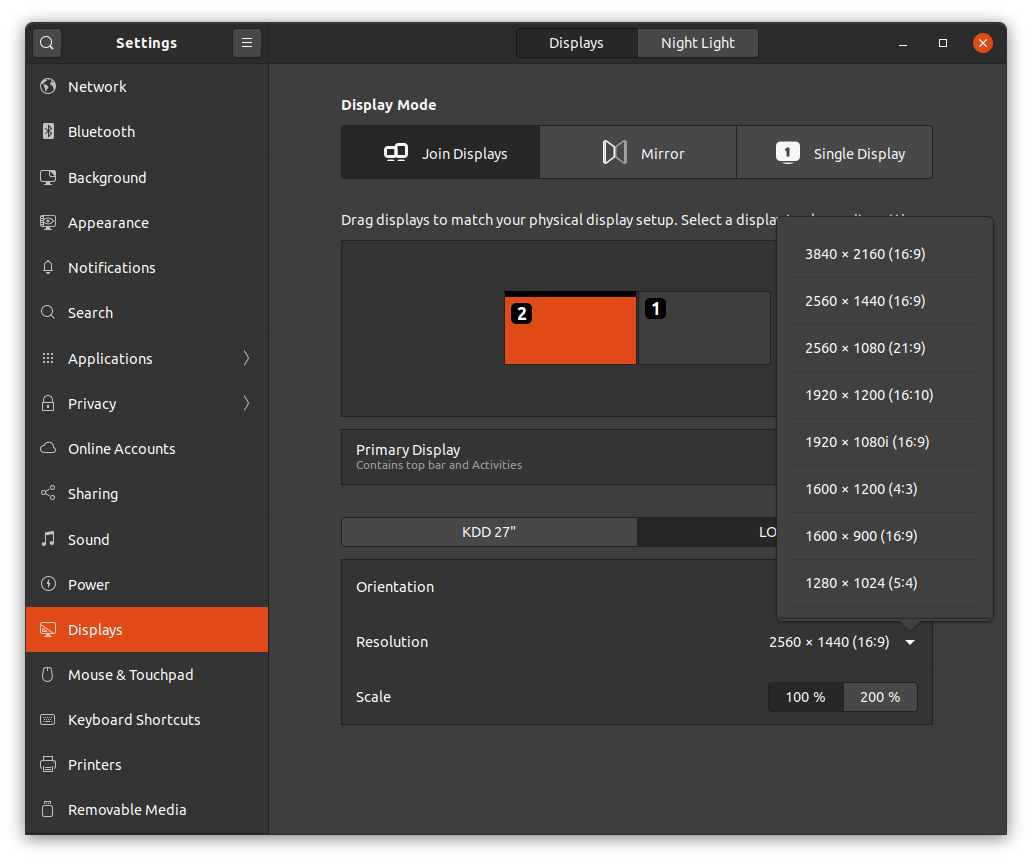