Secure Shellfish (Plus Textastic) on iPad Gets the Jobs Done

Secure ShellFish is an iOS/iPadOS terminal + file sharing app by Anders Borum. It has a few interesting features that make it a compelling tool to put in your iOS toolbox for SSH-backed work.

I have been using Blink.sh on iOS for some time. It has improved hardware keyboard support and natively supports mosh mobile shell, which is handy for flaky SSH sessions. Originally using it built from source (see its GitHub repo), I eventually purchased Blink.sh from the AppStore. It is reliable, but recently some of its limitations came to light, such as some native iOS integrations.

The rest of this post is about exploring Secure Shellfish as a terminal (SSH client) and its all-around iOS network and file-system capabilities.

Here are a couple of the things that Secure Shellfish can do to make “Terminal Life” better on iOS:

Files.app compatibility
Server directories appear in the Files app. Modern iOS apps can open files and directories in-place. This is a HUGE feature over a typical SSH terminal app.
iOS integration with your shell
As examples, from at a shell prompt in its terminal, you can access Shortcuts, open webpages, and copy to pasteboard, all coordinating with native iOS apps or features.

Secure Shellfish has many other features that improve the iOS terminal experience. There’s a way to always connect to a tmux session in a terminal startup configuration. Or iCloud can be used to sync SSH keys. Edit a file on the server using ‎Textastic Code Editor 9 on the App Store. And, it can be given permission to keep SSH sessions open in the “background”, meaning it will keep an SSH session running even if you switch away from its app on iOS.

Demonstrating a Workflow, Including Screenshots

I have this blog as a jekyll-based GitHub (User) Pages repository on GitHub. Adding a new post involves adding a markdown file which contains the content of the post.

To preview edits as they are being made to the blog post, I can run jekyll as a server locally. For this demonstration, a Ubuntu virtual machine running on a QNAP NAS which lives on my home LAN is our “server”. The VM is configured to have an SSH server (which is how Secure ShellFish does most of its magic). It also has a container runtime (Docker) installed, which makes it convenient to run jekyll from a container.

Following is how this blog post was made by leveraging Secure ShellFish on an iPad.

Installing its officially supported shell integration (for BASH, zsh, etc.) provides a built-in textastic <<FILE>> that works to open a file (via the SSH session, directly for a file on the server) in Textastic editor, and all right at a shell prompt in ssh terminal.

For textastic command to work, it relies on installing Secure Shellfish’s native shell integration. “Installing” involves sourcing its shell helper file from shell startup files. The app even provides a way to automatically detect your shell and install its helper file from within an active ssh terminal session.

After opening the file to edit, I wanted to run Jekyll on the server, so that I could preview edits that were being made to the file. This was done using a jekyll docker image, and I started the docker container interactively.

Using the same terminal shell session that was used to launch iOS editor, the running jekyll server polls the filesystem to detect changes and then regenerates the blog. This (docker container) runs on the same virtual machine where we are (1) SSH-ed into for our terminal and (2) which has been exposed to iOS (by Secure ShellFish) the file we are editting. 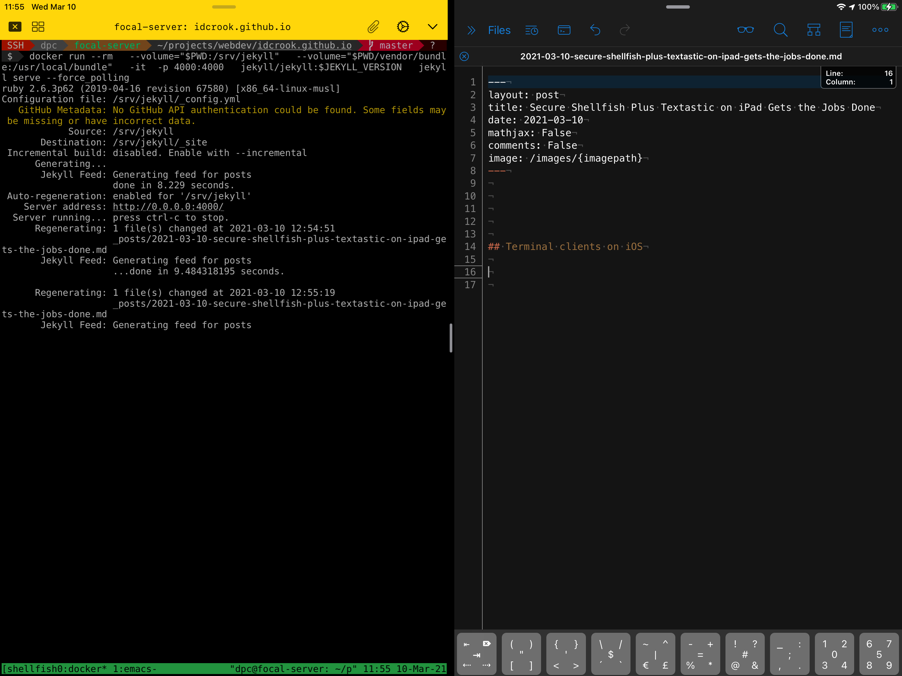 If you look closely, you may even notice the tmux bottom bar in the terminal screen. I configured the server connection in Secure ShellFish this way. This means even if we lose connection to SSH session, the docker container will continue running and we can re-attach to same tmux session later.

I was able to use iPadOS multi-tasking to swap in Safari.app to view a previews of the regenerated pages after edits were made. This is as simple as opening the web page the jekyll server was hosting on the VM on my local network. 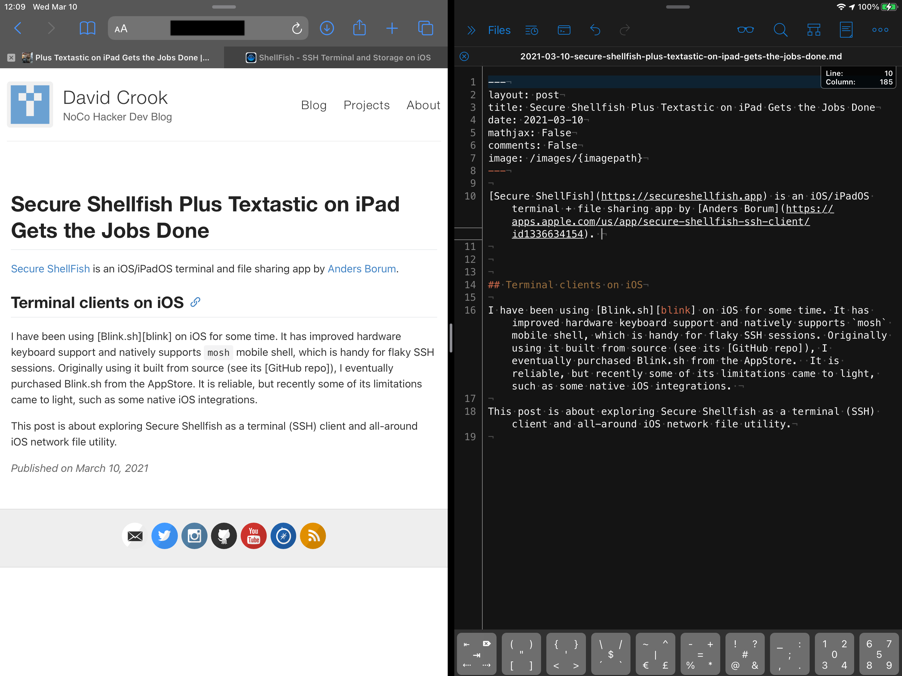 Note that even though Secure ShellFish was not a foreground application, it was still running jekyll in its SSH session (using its background running feature).

I was pleased to find Secure ShellFish’s tool chest of capabilities and features that enabled some seamless workflows that I hadn’t realized were even possible on iOS. I’d recommend you too try out Secure ShellFish.

I am also a fan of another of Anders Borum’s apps, the excellent ‎Working Copy - Git client on the App Store.